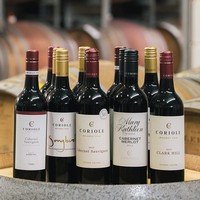 2013 Mary Kathleen
"Deep red colour with a tinge of purple on the rim. The bouquet is savoury, earthy, oaky and barrel-influenced - not fruity. The wine is very full-bodied and indeed, quite massive. The tannins are commensurately abundant and firm. They coat the whole interior of the mouth. A very big, solid wine, not really cabernet-varietal, but generously proportioned and worthwhile cellaring. 93 points"
Huon Hooke, The Real Review

2010 Estate Cabernet
"Medium to full red-purple; an excellent example of the way McLaren Vale can stamp its regional character on cabernet without compromising its varietal character; here savoury dark chocolate aromas and flavours are sewn through the plentiful fruit of a medium- to full-bodied wine. 94 points"
James Halliday