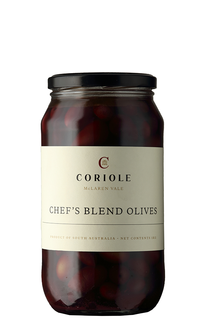 Coriole has been producing fine table olives since the early 1990s. The olives are sourced from the McLaren Vale region. The process is as simple as it is laborious - the olives are picked, brined, fermented and packaged by hand at the winery.

Varieties include Kalamata, Verdale, Koroneiki and Leccino. Our olives are all packaged with minimal salt levels, allowing the integrity and texture of the fruit to be expressed completely. Coriole Vineyards have been rewarded with the two most recent Australian Olive Association National Expo Trophies for producing Australia's best table olives!

The king of table olives, originating in the Peloponnese region of Greece. Dark fleshy fruit with a rich and full flavour.

A smaller black olive originating in Greece and highly prized for thousands of years for the quality of olive oil it produces. When brined the Koroneiki olive produces a table olive sought after by great chefs, with perfumed, delicate aromas and gently flavours.

From Italy, the Leccino is a drak skinned, highly versitile olive, suitable for both fine olive oil production and as a medium-sized, full flavoured table olive.

Originating in France, the Verdale is a green olive that found a home in McLaren Vale in the late 19th century. The fruit is crisp and the flavours are clean and fruity.

Both used primarily in the production of extra virgin olive oils, the Pendolino is prized for adding delicacy, while the opposite is true for Coratina; pungent and strong, this green olive is used judiciously to add a peppery flavour and a desirable touch of bitterness to the finish of fine olive oils.