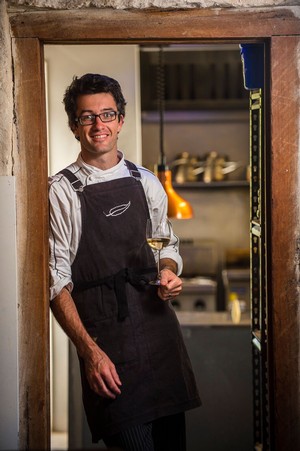 Coriole winery in the heart of the McLaren Vale wine region is proudly launching Gather at Coriole; a fresh and exciting destination dining experience in partnership with Head Chef Tom Tilbury of Gather Food and Wine.

Set to elevate McLaren Vale dining to new heights; Gather at Coriole, led by Head Chef Tom Tilbury, is a collaboration born of a longstanding relationship between Coriole and Tom. It’s an evolution and amalgamation of styles, and embraces the ethos of both Coriole and Gather Food & Wine. It’s a homecoming for the former McLaren Vale local and his family.

General Manager Mark Lloyd says that both Coriole staff and the Lloyd family are very excited by Tom’s appointment. “This is a great chance to see a collective vision becoming a reality.”

Gather restaurant is situated at Coriole Vineyards in one of the region’s most picturesque spots. Overlooking vine-studded hills, the restaurant will open as Gather at Coriole on June 14 under Tom’s leadership.

Gather at Coriole brings together two passionately family-run businesses, with the restaurant offering a menu driven by seasonal, local and sustainable produce paired with a range of beautiful Coriole wines showcasing the region’s terroir.

Founded in 1969, Coriole continues to operate as a family run business, with third generation Duncan and Peter Lloyd now at the helm. The historic estate began its viticultural life in 1873 with 12 acres under vines, the original and prized Shiraz vineyard planted immediately after the first world war in 1919. Though Shiraz is the most significant variety grown on the estate, Coriole is a leader in Australia due to its role in developing new varieties which lie under the “The New Australian Collection” banner.

Coriole produce and wines will feature distinctly on the shared, grazing style menu in the restaurant, and a passion for sustainable, local produce will see Tom scour the region and the large estate kitchen garden for only the finest ingredients.

Diners who have been fortunate enough to experience Gather Food and Wine in the seaside town of Robe have been eagerly awaiting the announcement of the new location for the Gather concept.

Gather at Coriole will be open Thursday to Monday and opening seven days a week for lunch from mid-July onward. The restaurant will offer an exciting a la carte and tasting menu, the latter with a wine pairing option. Click here to book.